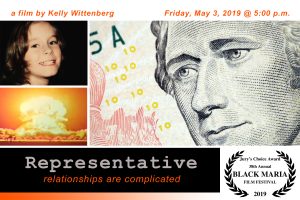 Please join us for this free event at the Judy K. Jolliffe Theatre on the Kalamazoo Mall from 5:00PM to 8:00PM at the May 3 Art Hop.

Here is more about

Please join us for this free event at the Judy K. Jolliffe Theatre on the Kalamazoo Mall from 5:00PM to 8:00PM at the May 3 Art Hop.

Here is more about the films:

Pictured Rocks – Experimental
9 min. by Jack Cronin, Ann Arbor, MI (Filmmaker will be in attendance.)
A study of Pictured Rocks National Lakeshore, on the south shore of Lake
Superior in Michigan’s Upper Peninsula, during the winter and spring of 2018.

Gloria’s Call – Documentary
17 min. by Cheri Gaulke, Studio City, CA
In 1971, graduate student Gloria Orenstein received a call from Surrealist artist Leonora Carrington that sparked a lifelong journey into art, ecofeminism and shamanism. Gloria’s Call, uses art, animation and storytelling to celebrate this wild adventure from the cafes of Paris to the mountaintops of Sami Land. Now, more than 40 years later, Dr. Gloria Feman Orenstein is a feminist art critic, author, pioneer in the field of the women of Surrealism and scholar of ecofeminism in the arts. Her delightful tale brings alive a history of women in the arts.

Stone on Stone – Narrative
8 min. by Mohsen Serajian, Tehran, Iran
An Iranian family decides to kill an innocent woman because of her alleged
adultery. Her husband’s friend is commissioned to do the murder. While he
drives her outside of the city to do what is expected, their conversation takes an unexpected turn.

Representative – Experimental
9 min. by Kelly Wittenberg, Kalamazoo, MI (Filmmaker will be in attendance.)
1. Typical of a class, group, or body of opinion.
2. A person chosen or elected to speak and act on behalf of others in a
legislative assembly or deliberative body.
3. Serving as a portrayal or symbol of something.

Filmmaker Bio: Kelly Wittenberg is a filmmaker and media artist based in Kalamazoo, Michigan. She is currently an Assistant Professor of Film, Video, and Media Studies at Western Michigan University. Kelly has taught a wide range of courses in film production, digital video, and interdisciplinary media. Her work has been encouraged by such varied organizations as the Savannah College of Art and Design, the Nevada Women’s Film Festival, the Anthology Film Archives, and the Seattle International Film Festival. Kelly holds a Bachelor of Art degree in Art from the University of Nevada, Reno, and a Master of Fine Arts degree in Film from Syracuse University.

Birthday – Documentary
9 min. by John Psathas and Liliane Calfee, Chicago, IL
Four high school girls from Chicago’s South Side explore the topic of
homelessness through the eyes of a man who shares his firsthand account of living on the streets. By joining him on his journey, the filmmakers’ hope is to encourage compassion and kindness for people experiencing homelessness.

Voice – Narrative
10 min. by Takeshi Kushida, Tokyo, Japan
A lonely man becomes fascinated with a shadow that appears on the wall of his apartment.

Black Dog – Narrative
6 min. by Wooseok Shin, Seoul, South Korea
“Black dog syndrome” is the name for the phenomenon in which dark-coated dogs are overlooked in shelters in favor of lighter-colored dogs. Don’t overlook that dark-coated beauty waiting in the shadows. You may be overlooking your new best friend.

The Velvet Underground Played at My High School – Animation
7 min. by Tony Jannelli, Summit, NJ, and Robert Pietri, LA, CA
On Dec. 11, 1965, an unknown four-piece rock ‘n’ roll band took to the stage for the first time at Summit High School, in Summit, NJ. “Nothing could have prepared the kids and parents for what they were about to experience that night,” wrote Rob Norris, a student at Summit at the time, in Kicks magazine. “Our only clue was the small crowd of strange-looking people hanging around in front of the stage.

Unsettled – Experimental
7 min. by Tara Knight, Denver, CO
Multiple layers of archival and historically-based images appear and disappear as they reveal glimpses into the ecological and economic histories of the American landscape. A journey through American history includes the early lives of Indian peoples morphing into white settlements, industrial development, railroads, and dense landscapes.

The Italian Gaze – Animation
14 min. by Sandro Del Rosario, Los Angeles, CA
The Italian Gaze portrays the beauty of Italy through its landscapes, history, art and architecture. Alternatively, the filmmaker presents his disillusionment and inner conflict with his home country. The passages drawn and animated with intense color do not reference reality; instead they represent an inner compass of emotional memories, as the film unfolds through the lines of a poem.