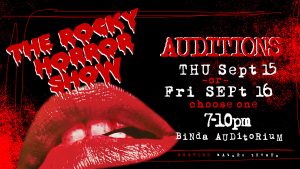 Kellogg Community College Theatre is holding auditions this month for its upcoming production of the musical comedy/horror classic “The Rocky Horror Show.”

Auditions, which are free and open to the general public as well as KCC students, will be held from 7 to 10 p.m. Thursday and Friday, Sept. 15 and 16, at the Binda Performing Arts Center, on campus at 450 North Ave. in Battle Creek. Participants should plan on attending the entire three-hour session on one of the audition dates.

Participants must be 18 years old or older to audition for the play.

Individuals auditioning for the play need no prior stage or dance experience and don’t need to prepare any material ahead of time, though an audition form will must be filled out onsite in advance. Participants should arrive promptly at 7 p.m. to fill out the form.

The audition process will consist of learning a 30-second piece of choreography and part of a song, which will be learned and practiced in large and small groups and then performed solo. Following the singing and dancing portions of the audition, participants will have a change to read a selected scene or two from the script with script in hand.

Cast members must be available to rehearse at least three to four nights per week during rehearsals, which will run from 7:30 to 9:30 p.m. Mondays through Fridays starting Tuesday, Sept. 20.

The cast list will be posted by noon, Tuesday, Sept. 20, at the Davidson Visual and Performing Arts Center on campus and on the KCC Theatre Facebook page at facebook.com/KCCTheatre.

“The Rocky Horror Show” is a musical comedy/horror show about a newly engaged couple who wind up at the home of a mad scientist after getting caught in a storm. The production inspired the 1975 feature film “The Rocky Horror Picture Show” and has since become a renowned cult classic known for audience engagement and participation.