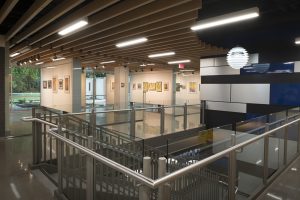 The Davidson Center, which is free and open to the public and primarily houses the College’s visual and performing arts programs, was renovated in late 2014 to mid-2015. The $6.6 million renovation project, funded by the voter-approved capital millage renewed in 2012, significantly upgraded the center’s facilities and technology capabilities, expanded common areas for students and allowed for the integration of new equipment and materials, including a larger stage and new theater-style seating in the center’s auditorium.

Mark O’Connell, interim president of KCC, says the updated space “. . . is better equipped to serve in its role as a venue for the several community events held onsite each semester.” Additionally, O’Connell says that the new space is “. . . a better version of the asset it’s always been to the Battle Creek community.”