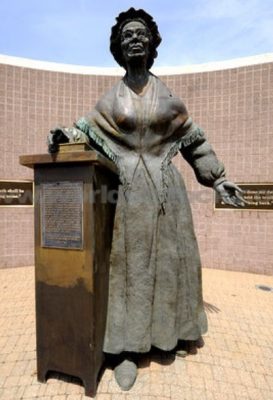 View larger image
Installed in 1999
Location: Battle Creek’s Monument Park
About the Sculpture: The sculpture is a monumental tribute to Sojourner Truth, a woman who traveled the Underground Railroad on a mission for human equality and the humane treatment of slaves, women and the poor. Sojourner Truth was inducted into the Woman’s Hall of Fame in 1983. Truth lived in Battle Creek for 26 years.(source)
Former Battle Creek Mayor Ted Dearing officially welcomed Sojourner back to Battle Creek. "She will serve as a constant reminder of her messages of dignity, respect and freedom for all, messages that are just as relevant today as they were 100 years ago," Dearing said. "Let her serve as a reminder that though we have come far as a city we can do better, and let us not rest until all have freedom and equality." (source)