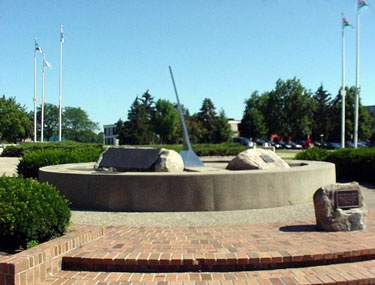 View larger image
Installed in 1985
Location: Near the flag plaza at the center of campus, Western Michigan University
About the Artist:  Born in Ukraine, Kruglak immigrated to the United States with his parents in 1904. Kruglak received his Bachelor’s Degree in 1934 and Master’s Degree in 1936, both from the University of Wisconsin. In 1944, Kruglak began working as an assistant professor in Physics at Princeton University. After receiving positive recommendations on his teaching capabilities from Princeton, Kruglak went on to receive his Doctorate’s from the University of Minnesota in 1951. In 1954, Kruglak joined the WMU faculty as an associate professor in astronomy and physics. From 1963-64, he was a fellow in the National Science Foundation Faculty and in 1977 received a distinguished service citation from the American Association of Physics. Kruglak was the author of three books and over 100 journal articles, research reports and laboratory manuals.
About the Sculpture:  The idea for the sundial was initiated and carried out by Kruglak. When it came to designing the sundial, Kruglak received help from former physical plant mechanical engineer, David Martin. The sundial was named after Haym Kruglak by the Board of Trustees. The sundial reaches 20-ft in diameter and has a 12-foot stainless steel gnomon, or arm. (source)
Information was recieved an article from the WMU News. Office of Relations. June 25, 2003