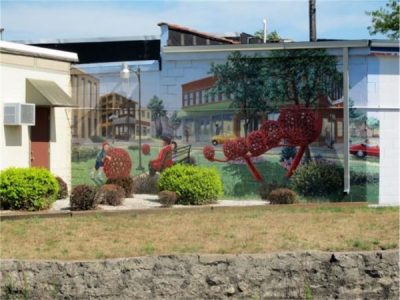 About the Artist:  “I spent my childhood on a remarkable farm outside of Bangor, MI. My parents called the farm the School of Homesteading and used it for teaching young people organic farming and self-sufficiency. It was a real working farm where the weather and seasons guided the work we undertook. A farm and livelihood that resulted in cold feet and fingers in winter, the wonderful flavor of maple syrup in spring, sweat and sore muscles from summer haying followed by a farm fresh BLT, and autumn’s storing of firewood in the midst of Michigan’s kaleidoscope of colors.

In 1981 I graduated from Bangor High School. With steady and purposeful stride I walked through my high school’s gates and straight to the hallowed halls of Western Michigan University. I was intent on a dual math and art major. Diligently I began the mandatory beginning art classes and floundered in boredom. Forsaking both art and math I spent the next seven years studying Anthropology. I graduated in 1986 with Bachelors in Science and discontinued the pursuit of a Masters in Anthropology short of completion. " – Conrad Kaufman (source)
Photograph by Jack Urban