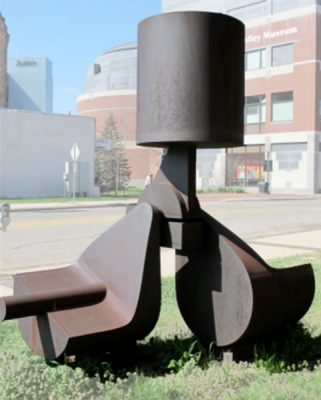 View larger image
Owner: The City of Kalamazoo
Location: Eleanor Street, near Mr. President Lounge
About the Artist:  "I was raised in Portage, Michigan, with the goal of becoming an automotive designer. I have always been interested in all things mechanical and this extends to art. After my first semester at Western Michigan University, I transferred to the art education program. After receiving a B.A. I realized that I had only scratched the surface of what I wanted to know about sculpture. I went right on to the M.A. Studio art program at WMU. After graduating I wandered through several jobs that included teaching and working as a clay modeler at Chrysler. Eventually I found my niche as a Psychiatric Social Worker for nineteen years. While I continued to build sculpture, homes, boats, and cars on a part time basis. In 2003, I turned again to sculpture, which is my primary focus."  – Douglas M. Greuzinga {link}