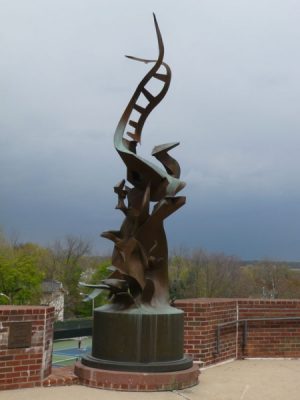 View larger image
Installed in 1993
Location: Nelda K. Balch Playhouse, Kalamazoo College
Made possible through the support of the Kalamazoo College Artist In-Residence Endowment.
About the Artist:  My career in sculpture began in 1955. It was then, while still a student, I began to exhibit my sculpture around Chicago in all sorts of places-art fairs, small galleries, local art centers, and the like. During the twelve years that followed, my sculptural development grew as a private, independent, studio-based, self-generated activity that responded to the stimuli I supplied and the skills I could master.
Then in 1967, I began work on Play, a commissioned sculpture which my studio could not accommodate. I started to work on sculpture for the first time outside of my studio, on a time and material basis in a metal fabrication shop, with the help of other men and machines. Play, as I look back on it, began what has been a second career for me, that of a public sculptor. The dimensions of this second career, which remains inextricably linked with the first, were not clear in that beginning, and have only become apparent to me with time and reflection on its course. – Richard Hunt