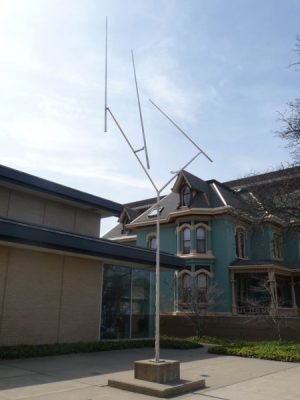 Artist: George Rickey (1907-2002)
Material: Stainless steel
Installed in 1973
Location: Kalamazoo Institute of Arts
About the Artist: George Warren Rickey was a world-renowned American artist who was one of the first artists to create kinetic, or moving, sculpture. Born in Southbend,Indiana, Rickey studied history at Oxford University and became interested in art while taking classes at Ruskin School of Drawing and Fine Art. After teaching for several years, Rickey served in WW11 as an engineer for the Army Air Corps. His work as an engineer in the war sparked inspiration for his studies at the Chicago Institute of Design when he began making kinetic sculptures in the 1950’s. Rickey’s work is held by several collections, including the Laumeier Sculpture Park in St. Louis, the National Gallery of Art in Washington, D.C., and the Museum of Modern Art in New York. (source)
Photo by Patrick Jouppi, 2011