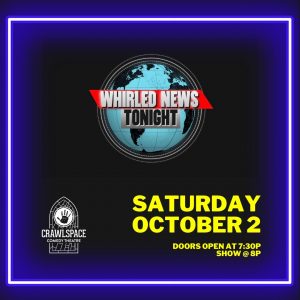 Kalamazoo’s own Jordan Klepper performed with the show during his time in Chicago, helping to craft his career in the world of news satire.

Chicago’s The Daily Herald said “Catch up on the latest news lampooned I.O.-style and deftly filtered through the sly sensibilities of the ‘Whirled News Tonight’ cast. The whip-smart improvisers craft sketches out of news stories clipped from local and national publications.”

As audience members enter the theater, they are invited to clip articles from newspapers and magazines and tack them to a corkboard on stage. When the show begins, performers enter dressed in professional newscaster attire and introduce the show with its motto “The News is Real, Everything Else is Improvised.”

One performer reads the opening paragraphs from a randomly selected article, which the troupe uses as the inspiration for a string of improvised scenes. Soon, another random article is pulled and a new set of scenes are performed. As the show develops, characters and situations cross over into multiple scenes creating a cohesive longform improvisational piece.

PROOF OF VACCINATION IS REQUIRED TO ATTEND ALL LIVE SHOWS AT CRAWLSPACE COMEDY THEATRE.

PROOF OF VACCINATION IS REQUIRED TO ATTEND ALL LIVE SHOWS AT CRAWLSPACE COMEDY THEATRE.

Street parking is available all around the venue. The Radisson parking lot is 1 block away if you prefer covered parking.

There are no barriers to access venue. It is street level.