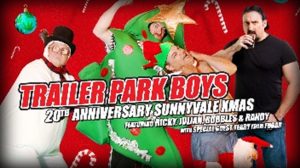 As part of a year-long celebration of their 20th anniversary, Trailer Park Boys Ricky, Julian, Bubbles, and Randy are hitting the road this holiday season to bring their drunk, high, and greasy Xmas extravaganza to the Kalamazoo State Theatre on Tuesday, December 7!

With Bubbles looking to spread some genuine, good-old fashioned holiday cheer, Julian greasily trying to capitalize on the audience’s festive spirit, and Ricky and Randy’s all-out war raging into its third decade, it's a guaranteed evening of reckless debauchery. Addressing the ongoing global crisis, Julian said, "I know times have been tough, but you should bring some extra money to the show.”

Joining the boys on tour for the first time is iconic Canadian burnout (and Ricky's cell mate), Terry from FUBAR! Spend an alcohol and drug-fueled evening with the boys for a Christmas show you’ll never forget...or maybe you will.

It's hard to believe that the iconic Canadian mockumentary television series, Trailer Park Boys is celebrating its 20th Anniversary. The show that follows the misadventures of Ricky, Julian and Bubbles in Sunnyvale Trailer Park premiered on Showcase on April 22, 2001.

The show has seen 13 seasons, 3 feature films, 2 animated series, 2 out of the park series, 6 specials and live concert tours throughout Europe, Australia, New Zealand and North America. It seems there is no stopping the comedy trio who continue to be loved by fans around the world.

Trailer Park Boys Jail, the 13th season of the show, can be seen on their very own streaming service app, Trailer Park Boys / Swearnet. Appearances by David Lawrence (Terry from Fubar), Alex Lifeson (Rush), and directed by Bruce McCulloch of Kids In The Hall fame, the show feels like a Canadian comedy, group hug.

How do the Boys plan on celebrating this milestone? "I am going to smoke 20 joints today," says Ricky. Julian adds, "I am out of the vodka hustling game and into crypto currency, and NFT's, it's the future.” And from Bubbles, "I am just thankful that we are all still together and love each other, plus the 20 years of free cat food has been decent."

All seating is reserved for this all-ages event. There’s an 8-ticket limit.