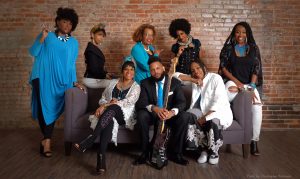 Join Washington, D.C.-based, African-American a cappella ensemble, Sweet Honey in the Rock®, in Celebrating Martin Luther King Jr. Day on January 17, 2021! With five-part harmonies and sign language interpretation, Sweet Honey’s sound ranges from African to blues to gospel and jazz. Throughout their sterling career, the ensemble has used their art form and their voices to defend civil rights, social justice, equality and freedom for all. Their messages of hope, resilience, and new beginnings feel particularly significant this year and come just days before the inauguration.

The show will feature an exciting lineup of remote guests sharing musical performances – celebrating the life of Reverend King and offering words of hope for the future.

The three-time Grammy® Award-nominated and internationally renowned group will perform songs from the group’s extensive repertoire, which includes We Are, Let There Be Peace, The Women Gather, and Come Ye. Since 1973, Sweet Honey has empowered and inspired with songs about a range of social issues, blending potent themes with gorgeous artistry to stir the mind and the soul.

Sweet Honey In The Rock® is an internationally renowned Grammy Award® nominated female a cappella vocal quartet with a history of over 45 years of distinguished service as activists and artists. Sweet Honey remains among the most relevant musical collectives in music today; both as a performance ensemble and as an ambassadorial African American organization founded on the triumvirate missions of empowerment, education and entertainment. By embracing the dynamic vehicles of a cappella singing and American Sign Language interpretation, the magnificence of their voices and inspired messages engage the ear, lift the soul and stimulate the mind in a positive journey you will not soon forget. A powerful and unique concert entity that fuses the elastic 360-degree possibilities of the human voice with a theatrical flair, Sweet Honey keeps avid audiences returning for more, year after year.