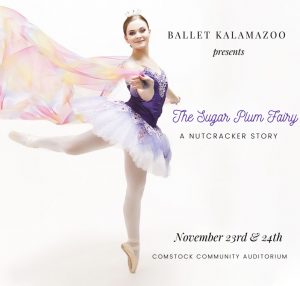 Kick off your holiday season by joining Ballet Kalamazoo and community dancers in a thrilling tale of bravery and adventure in our fresh and festive twist on the classic story of The Nutcracker.

Join us on a journey to The Nutcracker’s Land of The Sweets with Ballet Kalamazoo’s original ballet The Sugar Plum Fairy!

The Land of the Sweets is one of the most magical places in all the world. Filled with everything sweet and kind, the land sparkles with fairies dancing upon flowers. To become a fairy in this enchanted land is very special. You must be brave, kind, strong, and selfless. It takes more than just courage though. Your heart has to show that it is pure and kind, and you are willing to do whatever it takes to defend love, beauty and goodness. A select few become fairies, and only the Queen of the Flowers can grant them their wings.

The Queen of the Flowers also vigilantly protects her Kingdom. It is the Queen’s army of soldiers who ward off the mice who sneak in to steal her Majesty’s sweets. The ongoing battle between the Mice and the Soldiers rages on, worse than ever.

A beautiful Princess named Sugar Plum and the handsome Prince Knutt are in love and are engaged to be married. Embodying the essence of The Land of the Sweets, their love is true and pure. Our story takes you to their wedding day when all of the Queen’s subjects are gathering in the Kingdom to celebrate.

Just as Princess Sugar Plum and Prince Knutt are about to utter their vows, the evil Mouse Queen and her legion of mice storm the castle and kidnap Prince Knutt. To everyone’s horror, the evil Queen casts a spell turning the Prince into a Nutcracker as her mice steal him away.

As you can imagine, everyone in the Kingdom is in a state of panic. What can they do to rescue the Prince? Legends tell of a beautiful Snow Queen whose magical wand alone has the power to defeat the Mouse Queen and reverse the terrible spell over Prince Knutt.

Desperately asking for help, the Queen of the Flowers hears only silence until Princess Sugar Plum bravely steps forward to volunteer for the quest to find the Snow Queen. The Kingdom gasps in disbelief, but the Queen accepts Princess Sugar Plum as her Majesty’s champion to rescue the Prince.

A princess isn’t strong enough to go on a quest. Or is she?

Come with us to learn how the Princess earns her wings to become the legendary Sugar Plum Fairy.

Lap Child Policy: Lap children ages 2 and younger are permitted and do not require a ticket. They must remain on an adult lap during the entire performance.