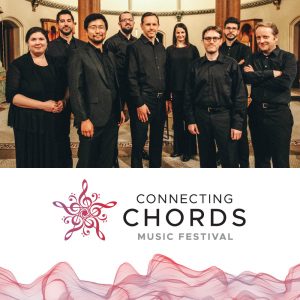 Schola Antiqua is an Early music vocal ensemble dedicated to the performance of music written before the year 1600.

Schola Antiqua is an Early music vocal ensemble dedicated to music written before the year 1600. They will be performing Jerusalem 1000-1400, a program originally commissioned by the Metropolitan Museum of Art.

The collective has received invitations to perform from the Indianapolis Early Music Festival, the University of Notre Dame, the Chicago Cultural Center, the American Guild of Organists, and other institutions across the country. The ensemble is currently Artist-in-Residence at the Lumen Christi Institute and formerly a resident artist at the University of Chicago.

A group that executes ancient repertories with “sensitivity and style” (Early Music America), Schola Antiqua takes pride in providing the highest standards of performance, research, and education of the Early music genre.

This event is sponsored in part by the Medieval Institute of Western Michigan University.

Running October 18 – December 1, 2019, the Connecting Chords Music Festival events center around the common convictions and threads that draw our community together – the importance of cultural traditions, human dignity, and the increased understanding of various faith traditions.

Learn more about the Michigan Festival of Sacred Music at www.mfsm.us.

Tickets are $20, $18 for seniors, and $5 for ages 25 and under. All seats are general admission. Tickets will be available for purchase on our website and at the door.