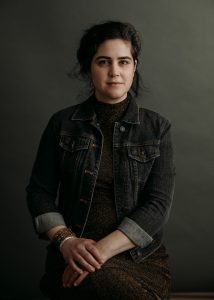 Enjoy a set of music performed by the duo Ashley Daneman on vocals and Rufus Ferguson on piano exploring spirituals, jazz standards, and other favorite songs in this first in a series of "house concerts" at the Kalamazoo Piano Company home of the Jazz and Creative Institute. Refreshments will be provided. No tickets, but free will offerings accepted.

Ashley Daneman: DownBeat Magazine selected Ashley Daneman’s self-produced, fan-funded debut, Beauty Indestructible as Editors’ Pick (January 2015) and printed a full-page interview with her in their March edition. A huge response for a little-known singer releasing an independent album at age 37, but critics would agree it was worth the wait. “Daneman is an assured singer who has clearly found her sound,” says Peter Bacon (The Jazz Breakfast) and All About Jazz calls it, “the triumphant debut of a seriously talented singer and songwriter.” Born and raised in Toledo, OH, Daneman performed in musicals and later studied Opera at the Cincinnati Conservatory of Music before finishing in Psychology and turning to study jazz on her own. In 2003, USA Today noted her as “a fine young jazz vocalist” and her unique voice as a composer earned her a spot in Betty Carter’s Jazz Ahead as a resident artist. What followed then was a complicated series of personal events, leaving Daneman’s career on the back burner as she returned to a “desk job.” Several years later, renewed efforts to pursue her dream landed her at Manhattan School of Music studying under Peter Eldridge, Kate McGarry, and Theo Bleckman. Successfully completing her masters degree as a scholarship student, in 2010, Daneman was chosen again for her artistry into The Banff Centre’s Jazz and Creative Workshop as a resident artist. A late career start and plenty of interesting life turns have caused Daneman to go deep with her blend of jazz and modern folk debuting “a publicly intimate recording that is frank and unapologetic. Beauty Indestructible is a collection of nine original “spirit poems” scored and written by Daneman, existing as an intensely personal song cycle. Daneman addresses the fundamental healing power of love” (C. Michael Bailey, All About Jazz). Drawing comparisons to Becca Stevens, Laura Nyro, and even Stephen Sondheim, Beauty Indestructible is summed up as “beautiful jazz art music from a gorgeous voice with superb accompaniment” (Mark S. Tucker, Folk & Acoustic Music Exchange) and as “a profound work of art that is so alive, so positive, and so blessedly musical” (Richard Kamins, Step Tempest). “Charming and enchanting with its offbeat/outside the lines sensibilities, [Beauty Indestructible] is killer stuff that’s sure to resonate with the gypsy in your soul” (Chris Spector, Midwest Record). Ashley and her husband, trumpeter Benje Daneman, are based out of Kalamazoo, MI.

Rufus Ferguson: Rufus Ferguson is a jazz pianist based in Kalamazoo, Michigan. He received his undergraduate degree from Western Michigan University and is currently a jazz piano graduate student studying under Jeremy Siskind. During his tenure at WMU he has studied with artists such as Scott Cowan, Andrew Rathbun, Edward Simon, Frank Carlberg and participated in masterclasses with artists such as Fred Hersch, Kenny Barron, Barry Harris and more. He is an experienced performer, arranger, composer and teacher, specifically in the jazz genre. Rufus got his start studying classical piano at the age of five. He became a gospel church organist at a young age and later began playing jazz piano at age 13. His dedication to being equally well-versed in multiple genres of music has afforded him many unique opportunities such as playing with Grammy-nominated and award-winning groups of all genres. Rufus was also a part of the DownBeat's 2015 Outstanding Graduate Small Jazz Combo, The Lasse Grunewald Quartet. Rufus has written arrangements and compositions for the WMU Advanced Jazz Ensemble, the Rufus Ferguson quartet, and the Nashon Holloway Band. These collaborative experiences led to opportunities to teach at The Keith Hall Summer Drum Intensive in Kalamazoo and Showchoir Camps of America at Heidelburg University in Tiffin, Ohio. He has performed at several festivals such as the Notre Dame Jazz Festival, Elmhurst Jazz Festival, Flint Jazz Festival and the Jazz Education Network (JEN) Conference in Louisville, Kentucky. In May 2016, Rufus became a piano instructor at Western Michigan University where he also directs the University Jazz Lab Band. In addition to his position at WMU, Rufus is a piano instructor for the Suzuki Academy of Kalamazoo and was recently appointed Jazz Band Director at Portage Northern High School.