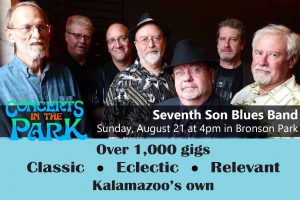 Presented by Arts Council of Greater Kalamazoo at Bronson Park

SEVENTH SON was probably the longest lived band at the 2014 International Blues Challenge in Memphis, as it was in 2006, when it also appeared in Memphis. It has been an institution of the Kalamazoo, Michigan, blues scene since its debut in 1986. Six of the seven members have been playing together for 20 years or more. The new guy has been with the band a mere eight years. SEVENTH SON is unusual in that it includes both a horn section (two saxophones) and harmonica, similar to bands led by Taj Mahal and Delbert McClinton. The band has three fine singers who share lead and harmony vocals. SEVENTH SON is known for its large, varied and eclectic repertoire.