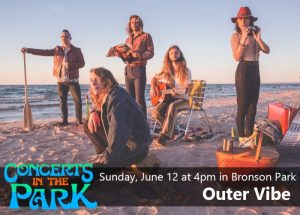 Presented by Concerts in the Park at Bronson Park

Building on Michigan’s storied rock and pop legacy, The Outer Vibe has long pushed the envelope for live performances with its ultra-animated stagecraft, audience-involving antics, infectious beats and never-ending supply of resplendent stage wear.
But behind the flash and flamboyance of one of West Michigan’s most sought-after live acts, there’s a serious, experienced pop project that goes where few bands have gone before.

This is a band that built its own cutting-edge recording studio north of Grand Rapids just so it could further polish catchy pop and alternative rock songs which echo influences as far-ranging as Maroon 5 and Muse to Queen and Led Zeppelin.