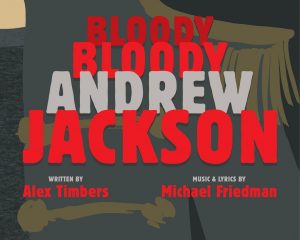 at The Gilmore Theatre Complex

Rock n’ roll with the seventh President of the United States! This electrifying story of Andrew Jackson – America’s first populist President and the creator of the Democratic party – is a fast-paced irreverent rock musical about the country we live in and the leaders we choose.

Bloody Bloody Andrew Jackson manages to be a goofy delight and a preversely affecting comment on the American temperament at the same time.” – The New York Times

Contains mature content – patrons under the age of 12 will not be admitted.