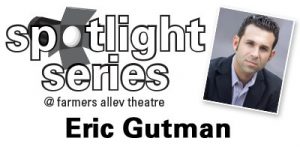 Eric Gutman: From Broadway to Obscurity

From Broadway to Obscurity is a high energy, incredibly funny concert about making hard choices for the right reasons.  At the peak of his career playing several roles in the Tony and Grammy award winning smash hit Jersey Boys on Broadway, Eric made the decision to return to his hometown of Detroit so that he could raise his two young daughters closer to his family.  He uses well-known musical theatre and pop songs, dead-on celebrity impressions, a heart-warming narrative, and a look at what goes on backstage of one of the biggest hits in Broadway history to tell the story of his transition from Broadway star to suburban dad.  He relied heavily on the values of his community – faith, family, tradition – in shaping this one-of-a-kind show.

ALL SALES ARE FINAL. No refunds or cancellations.