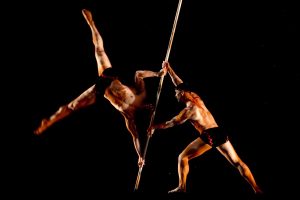 Known internationally for presenting work of exceptional inventiveness and physical beauty, MOMIX is a company of dancer-illusionists under the direction of Moses Pendleton. In addition to stage performances world-wide, MOMIX has worked in film and television, recently appearing in a national commercial for Hanes underwear and a Target ad that premiered during the airing of the 67th Annual Golden Globe Awards. With performances on PBS’s “Dance in America” series, France’s Antenne II, and Italian RAI television, the company’s repertory has been broadcast to 55 countries. With nothing more than light, shadow, props, and the human body, MOMIX has astonished audiences on five continents for more than 35 years.