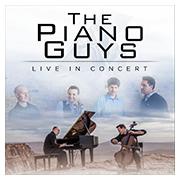 What began as an experiment and then exploded into an Internet phenomenon has now evolved into an incredible success story. THE PIANO GUYS—four talented dads from Utah—have climbed the Great Wall of China for their craft, landed atop Billboard charts, sold out tour dates around the world, accrued a massive social media following and scored YouTube viewership at 500+ million views. This unique performing arts center concert will feature their ultimate mash-up of classical music and pop, demonstrating why THE PIANO GUYS are a viral sensation across the country and around the world!