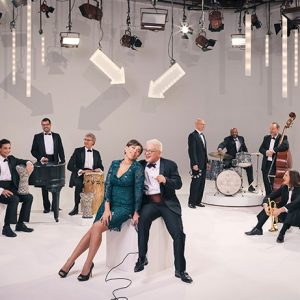 Pink Martini returns to the Gilmore Keyboard Festival after a memorable performance in 2012! Drawing inspiration from music around the globe while crossing the genres of classical, jazz and old-fashioned pop, pianist and band leader Thomas Lauderdale founded the “little orchestra” Pink Martini in 1994. Comprising nearly a dozen instrumentalists with singers China Forbes and Storm Large, Pink Martini performs its multilingual repertoire on concert stages and symphony orchestras throughout Europe, Asia, the Middle East, Northern Africa, Australia/New Zealand and North America.

“All of us in Pink Martini have studied different languages as well as different styles of music from different parts of the world… [consequently] our repertoire is wildly diverse. One moment, you feel like you’re in the middle of a samba parade in Rio de Janeiro, and in the next, you’re in a French music hall of the 1930s or a palazzo in Napoli… like an urban music travelogue,” says Lauderdale. The band has played with more than 25 orchestras around the world, including multiple engagements with the Los Angeles Philharmonic at the Hollywood Bowl, the Boston Pops, the National Symphony at the Kennedy Center and the BBC Concert Orchestra in London.

While in the studio for 2013’s Get Happy, Lauderdale already began working with the von Trapps (Sofia, Melanie, Amanda and August, the great-grandchildren of Captain and Maria von Trapp) on Dream a Little Dream, released in 2014. The von Trapp siblings performed frequently with Pink Martini since the album’s release.