Posted by All Ears Theatre ; Posted on
Auditions 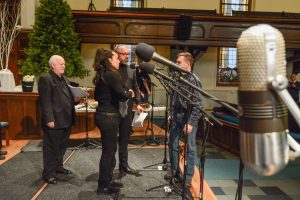 Due to COVID-19 All Ears Theatre auditions have been canceled. Roles will be cast by invitation.

Interested in being a Radio Actor? Then this may be your calling!

Come prepared to read from a script

Chase Marlow in: Frontier Flashback – Chase has started out having a quiet evening in the town of Sandal Creek. However, a fight soon breaks out between a cattle rancher and a local farmer, and Chase is forced to arrest one of them and take him to jail. The prisoner, looking to pass the time, asks Chase why he became a marshal, and Chase tells him a story about his relationship with his father when he was growing up.

The Bird Who Made Milk – Return to Africa for this folktale in which Grandmother Gogo tells of a mother, her bullying husband, and their two children. Living in a land where hunger rules, they find their lives changed by the intervention of a magic bird that brings out the worst in the father. But where one magic creature exists, others may appear.

The Cask of Amontillado – Montresor has asked his acquaintance, Fortunato for his assistance in determining if a cask of a light Spanish sherry is indeed Amontillado. Unbeknownst to Fortunato, there is an ulterior motive to the invitation.