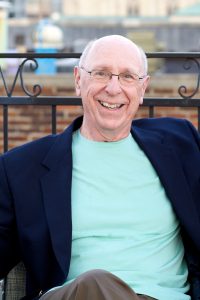 William Arnold (Arnie) Johnston lives in Kalamazoo and South Haven, Michigan. He was chairman of the English Department at Western Michigan University (1997-2007). Long-time faculty member in and co-founder of the creative writing program, as well as founder of the playwriting program, he has now left WMU to concentrate full-time on writing. His plays, and others written in collaboration with his wife, Deborah Ann Percy (Johnston), have won over 200 productions and at least as many readings, as

William Arnold (Arnie) Johnston lives in Kalamazoo and South Haven, Michigan. He was chairman of the English Department at Western Michigan University (1997-2007). Long-time faculty member in and co-founder of the creative writing program, as well as founder of the playwriting program, he has now left WMU to concentrate full-time on writing. His plays, and others written in collaboration with his wife, Deborah Ann Percy (Johnston), have won over 200 productions and at least as many readings, as well as numerous awards and publications across the country. Individually or in collaboration they have written, edited, or translated over twenty books. Arnie’s poetry, fiction, non-fiction, and translations have also appeared widely in literary journals.

Arnie’s books include three poetry collections: Where We’re Going, Where We’ve Been (FutureCycle Press, Athens, GA, 2020), Sonnets: Signs and Portents (Finishing Line Press, 2013); and What the Earth Taught Us (March Street Press, 1996). Other titles include The Witching Voice: A Play About Robert Burns (WMU Press, 1973) and Of Earth and Darkness: The Novels of William Golding (University of Missouri, 1980). His The Witching Voice: A Novel from the Life of Robert Burns was published in 2009—for the 250th anniversary of Burns’ birth—by Wings Press (San Antonio). His latest fiction projects are a novel, Swept Away (Atmosphere Press, 2021) and a collection of short stories, A Chance in the World. Arnie and Debby’s translations (in collaboration with Romanian writer Dona Roşu) include three long one-acts by Romanian playwright Hristache Popescu: Night of the Passions, Sons of Cain (Editura HP, Bucharest, 1999), and Epilogue (HP Publishing, Bucharest, 2011). Their published plays include Rasputin in New York (Editura HP, 1999), Beyond Sex (HP Publishing, 2011), Radiation: A Month of Sun-Days (HP Publishing, 2016), with Romanian editions translated by Roşu and Luciana Costea, Rumpelstiltskin: The True Hero (Eldridge Publishing, Tallahassee, 2013), and It’s About Us! (Eldridge, 2019). Duets: Love is Strange, a collection of Arnie and Debby’s one-acts, appeared from March Street Press in 2008. Their edited anthology The Art of the One-Act appeared in 2007 from New Issues Poetry and Prose. Their first children’s book, Monkeyshines: Mr. Robert Monkey Returns to New York, appeared in 2021 from Brandylane Publishers. From 2009 until 2012 they were collaborating Arts & Entertainment columnists for the award-winning national quarterly Phi Kappa Phi Forum.

Arnie is an accomplished actor-singer, having performed over 100 roles on stage, screen, and radio, as well as many concerts; he has also conducted individual dialect coaching and group workshops in a range of accents. Among his favorite roles are Prospero, King Lear, Quixote in Man of La Mancha, Hook in Peter Pan, the title character in Butley, Scrooge in A Christmas Carol, George Hay in Moon Over Buffalo, Charlie Now in Da, Drumm in A Life, Henry II in The Lion in Winter, and Moss in Glengarry Glen Ross. On his 1997 compact disc recording Jacques Brel: I’m Here! (Western Michigan University) he performs his own translations of songs by the noted Belgian singer-songwriter. Revues featuring his Brel translations have been staged in New York, as well as others in Chicago (recognized by nine non-Equity Jefferson Award nominations), Cincinnati, Boca Raton, Houston, Pendleton (OR), and Kalamazoo. His Jacques Brel’s Lonesome Losers of the Night was one of Chicago’s most acclaimed productions of the 2008 season during an eight-month run, and was reprised there in Summer 2017 to full houses and excellent reviews. His singable English version of Wilhelm Müller’s lyrics for Schubert’s Winterreise premiered in 2010.

A 1986 recipient of Kalamazoo’s Community Medal of Arts and in 2016 (with Debby) the Kalamazoo Civic Theatre’s Larkin H. Noble Award for lifetime achievement, Arnie is a member of the Dramatists Guild, Poets & Writers, The Associated Writing Programs, the Phi Kappa Phi Honor Society, and the American Literary Translators Association. He has been a resident playwright with both the Off-Off Broadway theatre company AAI Productions and Kalamazoo’s Actors and Playwrights Initiative (API) and an Artistic Associate with Chicago’s Theo Ubique Theatre Company. Since 2003 more than two dozen of his and Debby’s radio dramas have been broadcast on WMUK-FM as part of the Kalamazoo Arts Council’s All Ears Theatre series.

Arnie and Debby’s latest stage projects include: a full-length translation/adaptation of E. T. A. Hoffmann’s Nutcracker; Out in the Forty-Five, about Scotland’s Jacobite Rebellion (produced in 2009 by NYC’s Developing Act Theatre Company); and a musical, Summers on the Seine, with book by Arnie and Debby and lyrics translated by Arnie to jazz arrangements of songs by Gabriel Fauré. A CD of the Fauré songs, By the Riverbank, appeared in 2011, with vocals by well-known Chicago cabaret performers. Arnie and Debby’s audience-interactive holiday show, The Night Before Christmas, completed on commission from the Kalamazoo Civic Theatre, premiered in December 2012. Steering into the Skid, their short play about Alzheimer’s, took the $1,500 first prize in MemoryCare’s 2013 one-act competition, and appears in The MemoryCare Plays, an IPPY award-winning anthology distributed royalty-free to Alzheimer’s facilities across the United States.  Over the past three years Skid has more than sixty productions and readings in Michigan, New York, North Carolina, Minnesota, Wisconsin, Colorado, Virginia, New Jersey, Washington, Colorado, Oklahoma, and elsewhere; it recently won first place in Town and Gown Theatre’s 2018 Short Play Festival in Stillwater, OK. Their Beyond Sex was translated by Roşu and Costea as Dincolo de Sex, then adapted for radio by Domnica Tundrea and directed by the renowned Vasile Manta, was produced in 2015 on Romanian National Broadcasting. Their Radiation: A Month of Sun-Days, focusing on cancer patients undergoing radiation treatment, received staged readings in October 2014 at Farmer’s Alley Theatre, sponsored by the West Michigan Cancer Center, and was staged at Carver Center Studio Theatre in October 2017 as part of the Kalamazoo Civic’s season (again with WMCC sponsorship and support from Raymond James). Their one-act Recalculating was produced in April 2018 by Theatre North in Ironwood, MI.  Their chilling comedy Giving Up the Ghosts premiered in 2013 at Kalamazoo’s New Vic Theatre, and was produced in October 2018 by the Pennsylvania Playhouse (Bethlehem, PA), having won that company’s New Play Competition.